There are thousands of old silver coins issued in modern China, but most of them are from the late Qing Dynasty and the early Republic of China. Comparatively speaking, the Chinese Soviet, as a cultural relic of modern revolution, issued much less silver coins.

Under the leadership of general commander Xu Qianqian, the red Fourth Front Army led its troops to move westward from Hubei, Henan, Anhui and Soviet areas to enter Sichuan and join with local revolutionary armed forces. In February of the next year, the Soviet democratic government of Sichuan and Shaanxi Province was established in Tongjiang, Sichuan Province to vigorously carry out the land revolution. 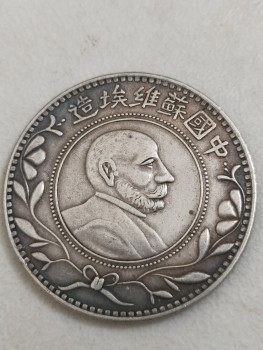 One silver coin with a sickle and axe is made by the Chinese Soviet. It was cast and issued in the revolutionary base area of Northwest Hubei. It is one of the only coins of the Soviet portraits. It is rare in the world. Each coin is extremely precious and beautiful.

This coin was issued in 1931 in the revolutionary base area of Northwest Hubei Province, which was established by Helong et al. The image of this coin and the following are shown in the currency of the revolutionary base of China (cultural relics press, edited by Hu Jing and Zhou Shimin, Institute of Finance and science, the people's Bank of China and the Ministry of Finance) on page 52: "issued by the Farmers Bank of Northern Hubei in 1931, it circulates in the northwest base of Hubei with Fangxian as the center. The silver coins were handmade by twelve silversmiths organized by the Soviet government of Fangxian County. On the obverse of the silver coin is the coin of the Soviet Republic of China, with Lenin on the right in the center. After the red army withdrew from the base area in March 1932, the silver coins ceased to be issued. " 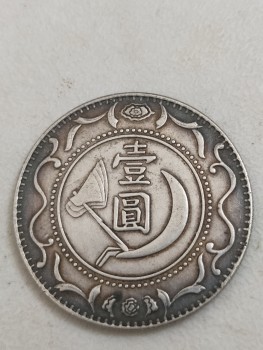 Inside the bead circle on the front is the right side image of Lenin with a beard. Outside the bead circle, six Chinese characters of "made by Chinese Soviet" are cast on the top, and two flowers are set to match. Inside the bead circle on the back, a circle is vertically written in the middle, and a sickle and axe are crossed. Outside the bead circle, there are flowers and branches. This coin is one of the only portrait coins of the Soviet workers, peasants and democratic regime led by the Communist Party during the Agrarian Revolutionary War of China. It was handmade by silversmiths with rough workmanship. Due to the backward production conditions at that time, the number of manufactured coins was limited. After the civil war, it was very rare. This coin is perfectly preserved and extremely precious. Lenin's head, like the Soviet silver dollar, rarely appeared in the auction because of the scarcity.If you want to purchase, please contact the collector hotline: 13802373772